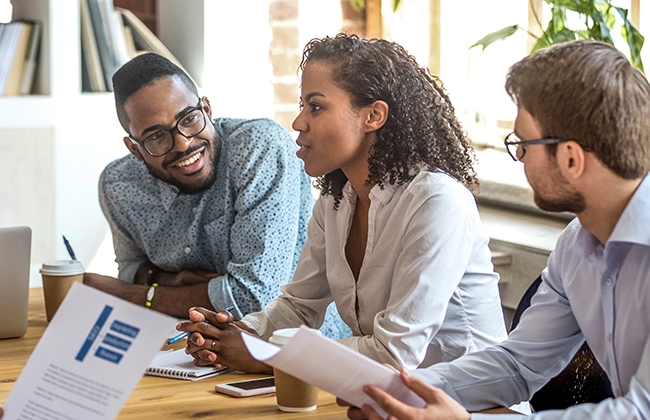 How companies can make DEI more than just a buzzword and actually alter their company cultures for the better, according to executives

The social movements that have emerged in recent years are recalibrating how many organizations focus on and prioritize company culture.

For "The Human Impact of Business Transformation," Business Insider's multi-year initiative to learn more about the effects of transformation in the workplace, we asked more than 50 executives what it takes to create a positive corporate culture.

Their response? Empowerment and inclusivity.

Now more than ever, companies are prioritizing diversity, equity, and inclusion, or DEI. They're putting their people first, turning intent into action to create new opportunities for diverse talent, and committing to changing their business outlook, processes, and ways of working on a fundamental level.

Increasingly, this includes hiring chief diversity and inclusion officers. As champions of equality on behalf of their brands, these people play a critical role in leveling the playing field for professionals and reshaping the modern workforce.

But hiring a top executive dedicated to this issue is far from enough. DEI is an effort that requires a proactive approach.

"It could happen naturally," Parmelee said of the shift toward a more inclusive workforce, "but it's either not going to happen ... in our lifetime or within a reasonable timeframe. You need to have commitment and deliberate action to make it happen."

Parmelee and Deloitte had both when they developed "ALL IN: Accelerating gender and inclusion," a strategy designed to increase the representation of diverse groups within the organization.

"Diversity is just a numbers game unless you have an inclusive culture," Parmelee said. "You're not going to get the benefits of diversity, like more robust decision making and innovation, unless you actually have a culture where people can speak up."

Judith Williams, a senior vice president and the global head of people sustainability and chief diversity and inclusion officer at SAP, echoes the importance of ensuring you aren't just paying lip service to DEI.

"We can think about diversity for diversity's sake, just having people with different backgrounds and different experiences," Williams said, but that "doesn't work unless you have the structures so that every voice can be heard and can contribute."

Williams said that underrepresented groups often encounter an additional challenge in that they tend to face "extra scrutiny" in new roles. "Rather than looking for how they succeed, we are looking for the ways that they will fail," Williams said of candidates who would increase a team's diversity. "There is always a risk that a candidate will fail, regardless of what their background is, even if they have exactly what we think they need ... but the ones that may become remarkable may be the ones that look a bit different."

For many organizations, diversity and inclusion measures were incited by compliance on an ad-hoc basis. Increasingly, though, companies are actively defining their DEI strategies and shifting to a more decisive approach.

"Now we realize that we actually need to have some fundamental culture change," Williams said. She added that companies need to think about their values and the behaviors those values create, whether those behaviors are inclusive or exclusive, and how best to deal with that.

Rethink education, outreach, and onboarding across the organization

Identifying and enhancing a company's values is something Doug Melville understands well. Eight years ago, he joined the global advertising agency TBWA as its first chief diversity officer, and today he's the head of diversity and inclusion at Richemont.

TBWA built the role from the ground up, beginning with an eight-hour workshop that included departments like HR, legal, production, creative, and casting. To build familiarity with the new inclusion mentality, Melville created a "language of diversity" by educating teams on everything from the number of countries in Africa and Asia to the difference between sex and gender, even defining BIPOC and Latinx.

"People don't talk about diversity if it doesn't directly affect them because they don't want to say the wrong thing," Melville said. "I had to get people to understand — not to criticize, but to teach and then decalcify the conversation."

Melville's efforts to improve diversity across the organization were not limited to education. He encouraged TBWA to rethink the employee outreach and freelance onboarding process; embrace supplier diversity by seeking supply chains owned, operated, and controlled by women or people of color; and invite clients to use more diverse actors in their ads.

But Melville cautioned companies to avoid "woke-washing," or acting culturally relevant simply to drive more exposure or sales. "The sniff test is high for authenticity," he said of brand advertising. "Everyone's watching, and there's a battle between optics and intent."

As companies continue to prioritize DEI, it's important to remember this aspect of business transformation is no quick fix. "Every couple of years, there's a different diversity challenge or opportunity or narrative in the public editorial sphere," Melville added.

As Melville and other businesses leaders have explained, DEI requires an ongoing commitment to your people and culture before it can benefit your brand.

This article was written by Jenifer Berman from Business Insider and was legally licensed through the Industry Dive publisher network. Please direct all licensing questions to legal@industrydive.com.