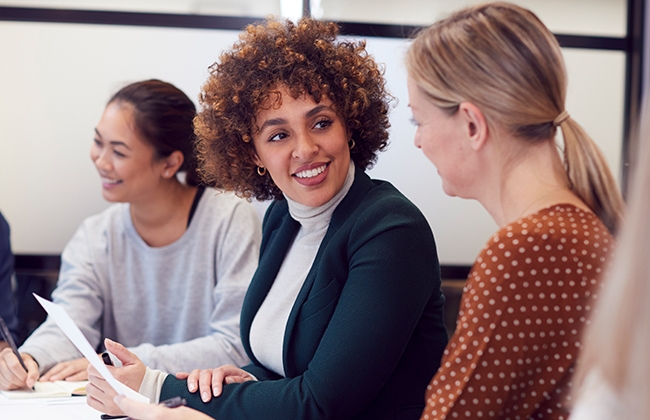 The past 15 months have been tough for women in the workforce. Women have suffered the majority of pandemic-related job losses: more than 5.4 million net jobs from April through the end of 2020, according to a January 2021 report from the National Women's Law Center. A report NWLC released the following month noted an additional 275,000 women leaving the workforce in January, making women's participation in the workforce the lowest it's been since 1988.

On May 25, payroll services provider ADP hosted a Women@Work virtual summit to examine some of the ways employers can make the workplace more attractive for female talent, among other issues. Here are four takeaways.

1. Ask employees what they need.

It may seem obvious enough, but employers often skimp on direct communication with employees when they're seeking to address their needs. Whether employers are running with the results from reports outside the organization or trying to intuit what employees might like, such strategies fail to account for the employees' individualized needs and problems.

"Ask [your employees] where the bumps are in the road," Martha Bird, business anthropologist at ADP, said. Affinity groups, one-on-one conversations and surveys are all ways to solicit qualitative feedback and get to know what employees really need. "Having a person-centered approach is absolutely critical to really get your mind wrapped around what the issues are instead of hypothesizing what they might be," Bird said.

"We sent out a pulse survey, and it was just three questions and an open text box, but we were really surprised … at the comments that came in about how we can think about the workplace in a very different way through the lens of what they perceive is getting in the way," said Teri Dennis-Davies, senior vice-president of equity, diversity & inclusion for Maple Leaf Sports & Entertainment. "[It was] things that we don't necessarily consider on a day-to-day basis because it's not our frame of reference."

The pandemic revolutionized work-from-home acceptance as a matter of necessity, but many companies still plan to shift back to business as usual when the pandemic subsides, despite employee resistance. While this may be unavoidable for certain positions and workplaces, employers should take into account how successful the transition was before automatically shifting back to old ways of working, panelists agreed.

"We are historically tied to a notion of productivity that is now fast becoming outmoded," Bird said. Workers have proven an ability to deliver results with accommodations like a flexible schedule and no direct supervision. Women will be attracted to workplaces that maintain the trust developed during the pandemic — trust that employers won't ‘ding' them for not being present in the office if they're still delivering on work.

3. Resume or re-energize your mentorship programs — even if they're virtual.

At the same time established career women are leaving in droves, many young women are just entering the workforce for the first time, Cate Luzio, founder and CEO of Luminary and moderator of the ADP panel, pointed out.

Mentorship will be essential to ensure those young women aren't penalized for entering the job market at a time when the workforce has dramatically changed, Bird said. "These sort of weak connections ... are actually what creates your knowledge of the [work] environment," she said. "I've seen this done in a number of organizations where there has been an effort to create groups for incoming, newly employed younger people, and that's helped to create a forum to discuss the concerns, what they're missing."

4. Look outside your regular networks.

Employers have a tendency to tap their same networks again and again — a strategy that tends to result in a C-Suite, or other workplace department, that is homogenous in both experience and demographics. Plenty of qualified women who've left the workforce won't be found through these same insular networks.

"If I talk to technology leaders, people I know, friends of mine, ex-colleagues, they always talk about a talent war," Mark Greville, VP of architecture at Workhuman, said. "And then when you get underneath the hood as to where they're looking, it's the same old thing they've been doing for 20 years. The same people, the same networks, the same stuff."

Greville has introduced an application quota of one-third female applicants at Workhuman, which has increased the proportion of female hires over the past quarter to 50% — a feat and "major turnaround" in the male-dominated architecture field, he said. "It's about forcing people to think about where they're looking for candidates," he added.

With kids attending virtual school and many child care options shutting down, mothers have had a particularly stressful time during the pandemic. Unfortunately, they were already a group vulnerable to leaving the workforce; roughly 43% of highly skilled women in the U.S. leave the workforce after having a child, according to Allison Robinson, founder and CEO of The Mom Project, a recruiting organization that helps connect moms with hiring companies.

"Our research tells us that moms make incredibly productive, diverse, equitable leaders, and we've been sharing that message with companies for the last five years," said Robinson. "Coming out of the pandemic, we're seeing companies betting on moms at a level that we've never seen before…In the past, if we'd never worked with a company before, they were looking at maybe bringing 10 or 15 women back to the workforce. Now we're getting commitments in the hundreds and thousands."

This article was written by Emilie Shumway from HR Dive and was legally licensed through the Industry Dive publisher network. Please direct all licensing questions to legal@industrydive.com.