Looking Ahead at What We Can Expect 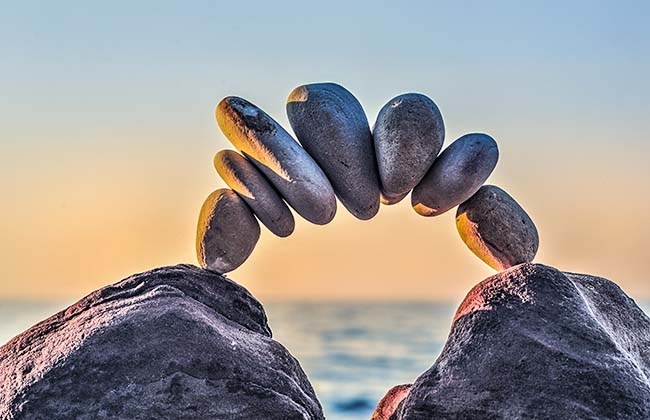 Read our forward-looking views on the 2022 market outlook in “The Year ahead: Balancing macro risks and markets.” 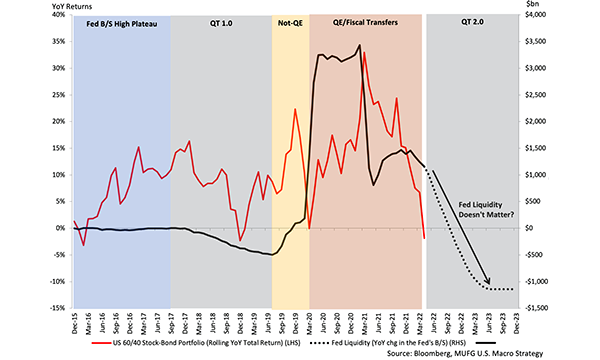 Quantitative tightening to show markets are hooked on liquidity

The Fed’s support for markets has resulted in QE narratives driving market dynamics, at times more so than valuation analysis and economic fundamentals. One doesn’t need to be reminded that nonstop Fed liquidity has helped promote memes like T.I.N.A. (there is no alternative) and F.O.M.O. (fear of missing out) dominating sentiment. With the convincingly hawkish Fed embarking on quantitative tightening, the tide of central bank liquidity is set to go back out to sea.

In our opinion the double-tightening of QT and frontloaded large Fed hikes will tighten financial conditions in a material way in the 2nd half and exacerbate the economic slowdown that lies ahead. 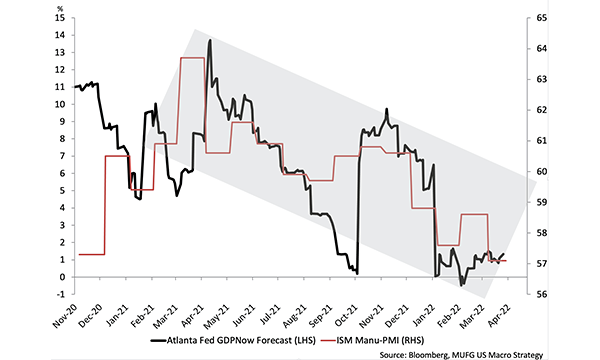 Our house view is that the U.S. will experience a tale of two halves over the course of 2022, where the momentum for 2021 would continue into 2022 but then decelerate as the year progressed. However, what if the slowdown happens sooner as we are already seeing mixed messages in the data during Q1? Various indicators, such as the Purchasing Manager Index (PMI) are signaling slower growth. These PMIs have been tracking the Atlanta Fed real-time GDP estimates too, especially post 4Q21. With energy prices weighing on the economy, this argues for the Fed to try to extend the cycle by raising rates less. 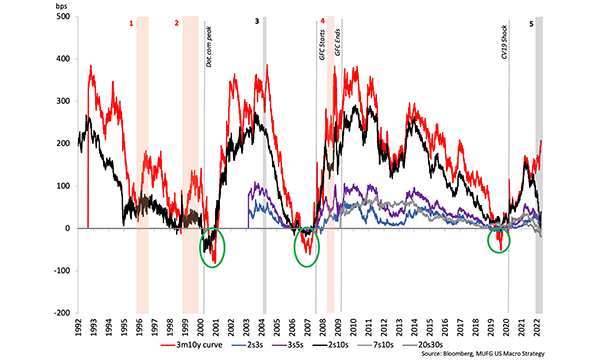 US Yield Curves: The Case of the Diverging and Inverting Curves

Inverted yield curves can be a source of contention for many because they have been a reliable predictor of recessions in the past. We believe there is cause for concern and would not quickly dismiss the latest inversion as just distortion. Our preferred measure is the 2s10s curve vs the 3m10y curve. Most curves are now inverted, but the 3m10y is diverging from the pack and is steepening. Historically, at major turning points, whenever there is a divergence like this it has occurred at either a peak in financial markets or at a point where a recession occurs shortly.

Our approach to analysis

Our U.S. macro strategy team’s four-pillar approach uses analytic tools and various databases to pinpoint what will motivate investors to reallocate assets, or to deploy new or different trading strategies. These techniques, along with historical market perspective, give a complete macroeconomic picture for our coverage teams and SMEs, and for our clients.

MUFG May FOMC Preview: Double-tightening to begin with 50bps and QT

In today’s episode, MUFG Head of U.S. Macro Strategy George Goncalves discusses his FOMC preview for the upcoming May meeting. George believes the Fed cannot flip to dovish this soon, and thus this meeting will likely come across as hawkish as they announce QT and lift rates by 50bps, the first time since 2000.

Exploring the interplay of FCI and rates

In today’s episode, MUFG Head of U.S. Macro Strategy George Goncalves provides an update on what has driven rates higher over the course of April. He also refreshes his view on the interplay of financial conditions, Fed’s QT, and how high short rates can ultimately go in the coming quarters.

In today’s episode, MUFG Head of U.S. Macro Strategy George Goncalves shares some of his observations from public data (such as TIC and MOF data) on how investment flows historically have looked in and out of Japan for U.S. assets at the start of their fiscal new year (which just started in April). George also commented on recent Fed speeches that are mentioning that the Fed’s balance-sheet is poised to shrink much more quickly this time around, all of this happening ahead of the March FOMC minutes release. George ties all these developments to his macro views.

The head of our U.S. Macro Strategy team – George Goncalves – is an industry veteran with more than 20 years on the sell-side and buy-side. George joined MUFG in April 2021 as head of U.S. Macro Strategy with a mandate to formulate U.S. Fixed Income views, drive market strategy thought leadership, and actionable trade ideas for clients. He focuses on rates, MBS, credit, the Fed/global central bank policy, U.S. dollar funding dynamics and all things macro-related.

George spent nearly a decade at Nomura Securities, first as the chief U.S. Rates Strategist and later as the Head of U.S. Fixed Income Strategy. Over his tenure at Nomura, he oversaw teams of analysts covering U.S. rates, U.S. credit and emerging market rates.

Prior to that, George was the Head of Fixed Income Strategy at Cantor Fitzgerald and a senior research analyst at both Morgan Stanley and Bank of America. He started his career in the Fixed Income markets on the buy side at the formerly known Merrill Lynch Asset Management division in institutional separate accounts, analyzing and co-managing portfolios of Treasuries, repo, short-term credit and MBS as an assistant portfolio management analyst.

Earlier in his career, George was voted one of the top 20 rising stars in Fixed Income by the publication “Institutional Investor” in 2007. And throughout his career he has been an active guest on Bloomberg TV and CNBC as well as quoted many times over in the financial press.

Professionally he has interacted with many debt issuers and has established a wide network of institutional investors from FX reserve managers, Bank Treasurers, real money and macro hedge funds.

George received his joint degree in Finance/Economics and Political Science from Rutgers University’s School of Management.