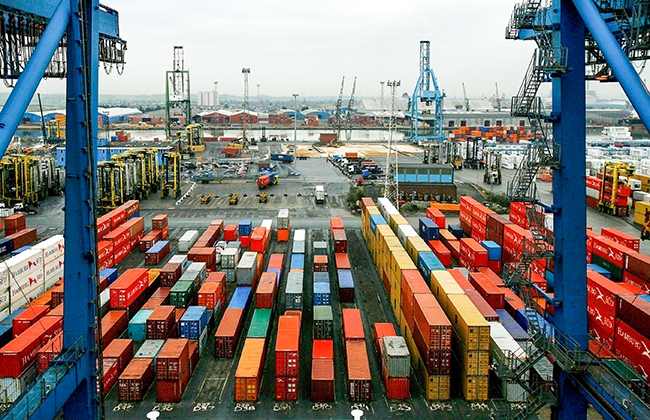 Your Supply Chain Doesn't Have to Be this Broken

Anyone with even the scantest stake in U.S manufacturing knows how supply chain disruptions are rippling through the economy. Shortages of lumber, drywall and glass are delaying the construction of new homes. Backlogged shipments of petrochemicals are slowing factory production. A lack of semiconductors could cost automakers up to $100 billion in revenue. Even Starbucks has been forced to drop items from its menu because suppliers are out of stock. And the list goes on.

While the causes of recent supply chain disruptions have ranged from pandemic-related plant shutdowns to the blockage of the Suez Canal to ransomware attacks, their impact has been exaggerated by one common denominator: the widespread embrace of just-in-time production, which has left manufacturers vulnerable to even a supply chain blip.

Just-in-time has won out because it cuts down the cost of buying and warehousing any number of parts. But with little inventory on hand and few (or no) backup supply sources, goods makers often have no choice but to throttle back or shut down if something suddenly becomes unavailable. “It’s sort of like supply chain run amok,” Willy C. Shih, a management practices professor at Harvard Business School, recently told The New York Times. “In a race to get the lowest cost, I have concentrated my risk. We are at the logical conclusion of all that.”

There’s no way manufacturers can safeguard against every possible breakdown in their supply chain; even as international trade has become a bogeyman, we operate—and compete—in a global economy. But as Winston Churchill famously said: “Never let a good crisis go to waste.” For today’s manufacturers, that means realizing that now, when demand is through the roof, is the perfect time to invest in technology, inventory, suppliers and people.

Invest In Technology To boost Productivity And Mitigate Disruption

At the height of the pandemic, Gojo Industries, a family-owned business that created Purell hand sanitizer, faced a similar challenge impacting many manufacturers today: an unheard-of spike in demand and widespread supply chain disruption.

Yet in 2020, it managed to boost production of Purell by 300%, ramped up 2.5 million square feet of new manufacturing and distribution space and brought on more than 500 more employees. Its secret? The family-owned company had been investing in Industry 4.0 technologies for years—technologies that automated production and digitized the entire process to reduce lead times from ten to two days and cut down on scrapped inventory.

“It allowed us to get more product out in the market quicker than we would have if we didn’t have those things in place. It helps with the flexibility and agile manufacturing that are so critical. It helps us stay competitive as a business,” Stephanie Onderko, Gojo’s automation and systems director for supply chain, reflected in the newly released “Make It Better: A Blueprint for Manufacturing in Northeast Ohio” report.

There’s a lesson here for manufacturers navigating our current supply shortage. New technologies can drive up productivity and efficiency to combat disruption. Using big data to monitor production lines, mitigate risks and share information across the value chains, for instance, can increase production by up to 25% and reduce downtime by 45%. Automation via sensors, robotics and other technologies can empower manufacturers to make more for less.

Though they cost money upfront, investments in technologies that increase productivity are always smart. They’re even smarter today. That’s because higher revenue from greater output and heftier profit from lower operating costs provide a way to defray the expense of carrying more inventory and/or the safety net production of crucial components. And with orders rolling in, manufacturers can rest assured they’ll have some extra cash on hand to put back into the business.

There’s one more payoff: The more technologically advanced a company is, the more likely it will be able to attract and retain those skilled and dedicated workers who are in such great demand today. Case in point: Smart manufacturing jobs pay an average of $12,000 more a year than more traditional manufacturing jobs.

Create And Sustain A Local Supplier Base

If crippling supply chain disruptions have taught us anything, it’s how long—and fragile—most of those chains have become. There’s much less risk of that happening if suppliers are clustered nearby.

Many of these local supply bases have been hollowed out, of course, so it would take time, money and widespread collaboration—between business leaders, government, nonprofits, community organizations and others—to rebuild them. But we saw this start to happen during the pandemic, when, for instance, PPE shortages led to the development of innovative local supply chains. If manufacturing customers commit to long-term purchases and pay a slight premium in exchange for having a more secure flow of inputs, those local ecosystems may very well stay afloat for years to come.

The benefits of a local supply chain are especially clear for smaller manufacturers, whose ability to create genuine relationships with nearby suppliers can pay dividends in a crisis. This isn’t as possible with overseas suppliers, who will want to service their bigger clients first.

Reinvest In Capacity And Inventories

Every business executive knows that reducing inventory reduces overhead costs, which, in turn, enables a company to lower prices and be a stronger competitor. But there is a limit on how lean manufacturers can become. Rather than keeping no inventory and counting on every supply shipment to arrive just in time every time, manufacturers should maintain enough critically needed parts to maintain full production if supplies are halted for a few days.

Some global factory-sector leaders have done and continue to do just this. 3M began building excess capacity in its respiratory mask factories in the early 2000s so it could quickly ramp up production during emergencies. Intel is spending $20 billion to build semiconductor plants in the U.S., closer to its customers.

Then there’s Toyota. The Japanese automaker, which is widely credited with perfecting just-in-time, has been the least affected by semiconductor shortages because it has encouraged suppliers to set up operations just outside its assembly plants. After previous supply chain disruptions, top management also revised its lean inventory thinking so that Toyota now carries up to a four-month supply of critical components, such as computer chips. While competitors have been forced to idle production because they can’t get semiconductors, Toyota keeps motoring ahead.

With everyone from Amazon to McDonald’s raising their minimum wages as the economy rebounds, sometimes sweetening job offers with signing bonuses, manufacturers should seriously consider offering higher pay and benefits, too. Doing so will not only help fill the backlog of orders and keep customers happy but enable organizations to operate more productively.

How To Pay For All This? Raising Prices Can Help

In the long run, these supply chain issues will settle: Companies will invest in themselves, expand capacities and do everything they can to not be caught flat-footed again when their customers need them. If they have to raise prices along the way to make that happen? Well, now is the perfect time to do it.

For one, customers probably have already been hit with price increases and are resigned to more coming. For another, those same customers have little choice other than to pay up since they, too, have slimmed down their suppliers to a chosen few in the name of efficiency. Besides, everyone else is jacking up prices—through May, producer prices jumped 6.6% over the previous 12 months, the largest increase in more than a decade. By joining in, manufacturers could not only cover their own rising costs of materials and labor but also make the investments they need to meet today’s supply crisis and lay the groundwork for future success.

This article was written by Ethan Karp from Forbes and was legally licensed through the Industry Dive publisher network. Please direct all licensing questions to legal@industrydive.com.